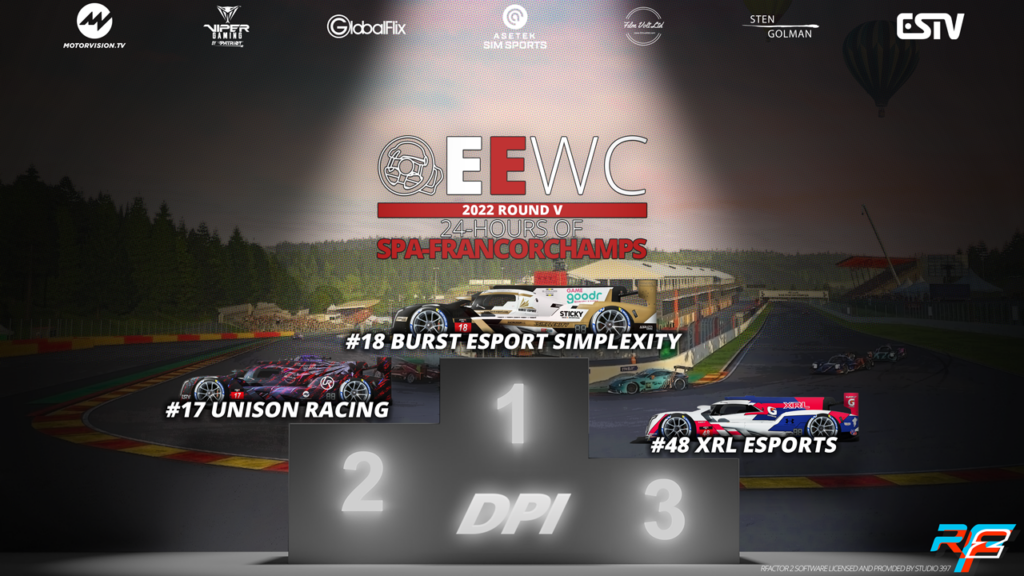 For Spa-Francorchamps, we saw the new team XRL Esports (https://www.facebook.com/XRLEsports22) join the DPi class. Everyone was excited to see the pace of the new team. But altough the #48 crew are veterans in simulated endurance racing, they are new to PC racing, and a lot of things are new to the team and they need to work it out. The pace was there, but the consistency was a problem, so they ended up in third.

Second place was taken by the #17 Unison Racing crew with a solid effort by the drivers, who once again lifted the pace and stability. But they couldn’t hold a candle to the #18 Burst Esports SimPlexity crew. They took pole position and led the race from start to finish. The Cadillac DPi is a beast and it was a solid effort this weekend by all three DPi teams.

48 points is the gap between #18 Burst Esports SimPlexity and #17 Unison Racing. That sadly means that if the #18 crew show up at Le Mans, they will have secured the championship, as there are only five DPi cars in the championship and the points for fifth is 20 points, due to the double points at Le Mans. Second place is almost equally locked in, but there is still a real fight for third with only two points in it between #11 SEM9 Axle and #33 Team Adrenaline.

Peter Munkholm
When John Nielsen won Le Mans 24-Hours in 1990, Peter was hooked with motorsports. He started sim racing on his uncles PC with Formula One Grand Prix by Geoff Crammond in 1992. Then progressed through IndyCar Simulator and IndyCar Simulator 2 on his Amiga 500+. When he bought his own PC in 1994 and a Microsoft Sidewinder Force Feedback Pro Joystick he was already deeply in love with sim racing. His first skirmish with light modding was a Pernod Anis blue, white, and red skin for IndyCar Racing 2. He was hooked! But sim racing really kicked off for Peter with Sports Car GT in 1999. And with internet access and what felt like an ocean of mods. Sports Car GT and the F1 simulators with endurance racing mods swallowed most of his spare time. Then the GTR mod for F1 2003 arrived on the scene, from some Swedish dudes who called themselves SIMBIN. That would change everything! Right about then was also when Logitech steering wheels reach a state of useful. So when the GTR game officially released Peter bought a Formula Force GP wheel the same day, went home and founded the Danish Grand Touring League (DGTL). In 2006 the first LAN event was held. This became GTR24H in 2007. As they say. The rest is history!